Workshops followed:
–  Grandma also has a say
–  Diversity; a big mess or a useful tool
–  ICL outside AFS borders

This year I was one of the lucky ones to get a funding for the Volunteer Summer Summit 2018. I want to thank EFIL and AFS Netherlands a lot for this opportunity! I learned a lot, met many great people and had an amazing time on Utøya!

The venue was at the island of Utøya in Norway where many people were shot on July 22nd 2011 by a shooter with very extremist thoughts. I think it is an honor that we could talk about this topic at this specific location. The location itself felt really peaceful, which made it unreal that something that bad could happen here. I think it was a good thing to see during the VSS how we can work towards the AFS strategy 2018-2022 to empower people of all ages and all backgrounds with the intercultural knowledge, skills and understanding required to take action and make a positive difference at home and around the world .
To be together with many AFS volunteers from all over Europe and some other countries outside of Europe was amazing. All people are very open minded which made the atmosphere great at the VSS. It was not really that groups were formed. You could just sit down with whoever you wanted to sit with and have great discussions about serious topics and less serious topics. Also you just had to open your arms and there would be someone around you to give you a hug if you needed it. I think just the way people act with each other at the VSS is part of the great VSS experience!

During the VSS I followed three workshops. My first workshop was called: ‘Grandma also has a say’. This workshop was about what view elderly people have and how we can connect that to the AFS spirit. For this it was important to realize when someone belongs to ‘elderly people’. Everyone agreed we cannot just put a number to it. It is just how people feel. And also, there are already gaps in between different generations close to each other. Due to the many mobile devices, social media and other possibilities the young children from now will grow up with a different perspective than the teenagers from now or young adults. It is important to realize this. During this workshop we also talked about how we can get elderly people involved in AFS. Like many people just sit at work and might like to do volunteering work. Or maybe we can do some volunteering outside of AFS at elderly homes to get connected with those people. The most important thing is to start ask people directly for what their needs are and see in what way we can help.

My second workshop was: ‘Diversity; a big mess or a useful tool’. In this workshop we talked about diversity, how do people see this and is it a good thing or can it also be bad? First it was our goal to see what diversity exactly means. Also on what aspects people can be diverse. This can be on many aspects from looks to culture and values and beliefs for example. We got the task to divide our group in two as diverse as possible groups as possible. This was pretty hard and we got a very interesting discussion. Like what is the goal behind this, what do we need the groups for? Which aspects do we think are the most important to divide the group? Like we can split up in gender, nationality and looks. But at the same time our qualities within a group might still be the same. The discussion went on for a very long time before we finally managed to put ourselves in two groups before the coffee break where the discussion continued. I think the most important thing from this workshop to remember is groups can be diverse in many ways. And just wanting to be diverse can influence the quality within a team. So people will really have to see in which ways it is best to be diverse to get to the best results as possible.

My last workshop existed of two workshop time-slots. So it was pretty long! It was about Intercultural Learning (ICL) outside of AFS borders. The first part of the workshop we talked about ICL, different culture models and how to use it. As many people have different views within the group, I sometimes thought it was a little bit confusing after I thought I understood. The second part we were more interactive. First we brainstormed about different target groups we may be able to reach through AFS to teach about ICL. Through a participatory democracy we ended up with four target groups: kindergarten kids, high school students, teachers and companies. For these groups we had to make a plan on how to teach these target groups about ICL by making a workshop. I ended up working on the kindergarten group. We got so excited during our work and we ended up with a great plan were the kids can travel during each session to a specific country on a magic carpet which is activated by the ‘if you’re happy clap your hands’ song. They will see and experience things about the culture and country during the trip, this could be done with the help of an AFS exchange student who is in the hosting country at that time. After the kindergarten kids fly back home they can make a free drawing about what they experienced. Every session they will see another culture and in this way we hope to show the kids at young age that all cultures are different, very interesting and not scary. As we were very excited of what we came up with we made a WhatsApp-group to work this plan out in a better way. There were also some volunteers who work with kindergarten kids who said they might be able to test this idea. So hopefully it will become reality! ?

The whole week of VSS was amazing for me! I really loved being there in Norway for this event. There were many interesting discussions, outside the workshops we could just hang out and we did a community project where I went with part of the group to the local Red Cross office to paint. Overall it was a great experience!

Thanks everyone so much for everything, and see you next year in Austria? ?

Below some pictures of the VSS, by clicking on the arrow you can navigate through the pictures. 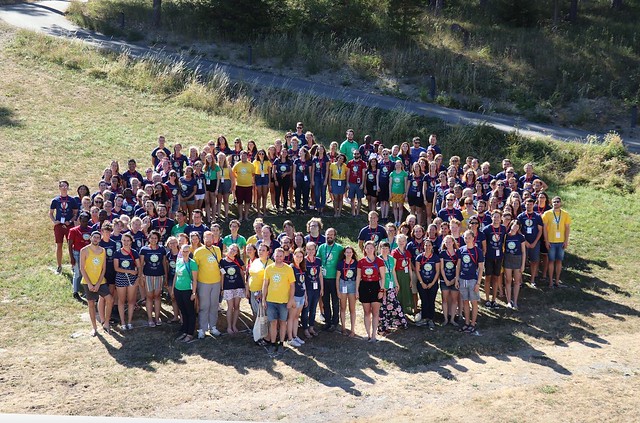