Jaayy, I’ve time for a blog again!! 🙂
It is December 27 and that means Christmas time is over. It was amazing to experience the American Christmas. But let’s start first where I ended last time in St. Louis.

So last time I wrote my blog in St. Louis. I went there with my hostmom to do the Hot Chocolate run. This run was also in Chicago. But we missed that one. I really liked the jacket that you could get with running the run. So we decided to go to St. Louis and then I could see some stuff there too. 🙂
Sunday morning December 14th we woke up early to go to the run. We walked to the start and waited until we could start. We ran easy because we were both injured. Becky hurt her heel and my ankle hurt. We ran the 5k in a little less than 30 minutes. After we ran we got Hot Chocolate (of course) and some other stuff with chocolate. My parents (in the Netherlands) followed us running online.

I tracked too where we ran: http://runkeeper.com/user/ShorttrackGirl/activity/482653351?&activityList=false&tripIdBase36=7zcxpj 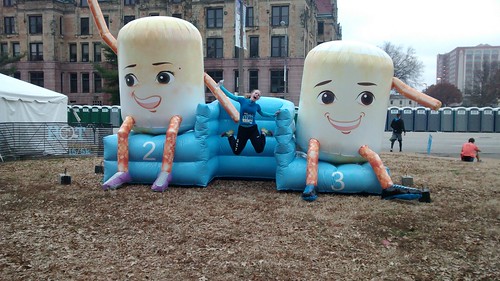 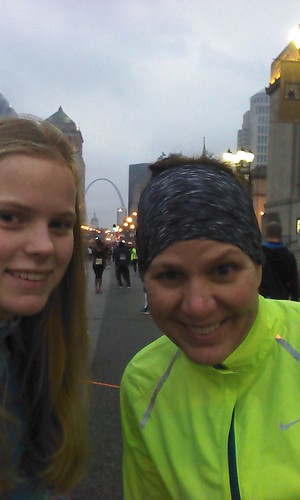 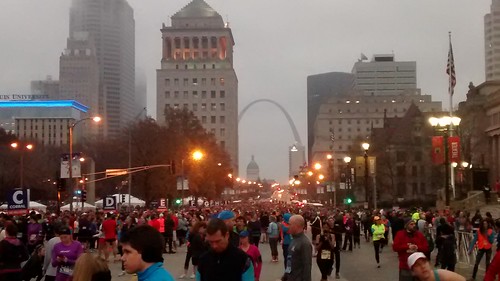 After the run my hostmom and I went back to the hotel. We took a quick shower and packed our stuff. After that we went to the Arch. This is like the thing you have to go when you are in St. Louis. It is a kind of bow. And you could go up in it. We did this. Up there you had an amazing sight on St. Louis. My mom went to St. Louis too during her exchange year in Texas in 1985/1986. I asked her to send some pictures and I tried to make the same +-30 years later.
I had a lot of fun in St. Louis. The only bad part was that I felt my ankle (the pain didn’t go away).. 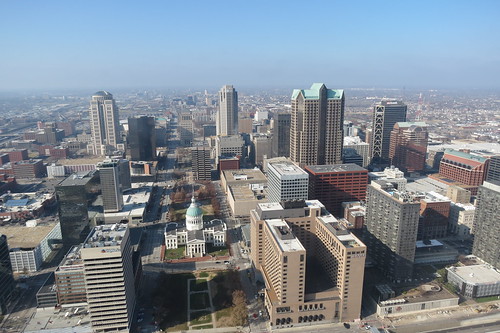 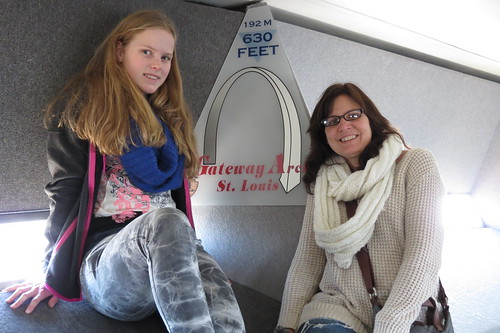 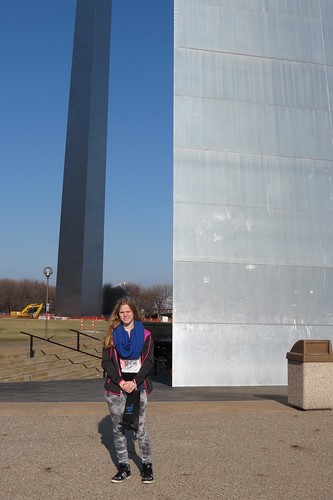 The next week at school I went to ‘the trainer’ so she could check my ankle. Because it did still hurt. Because I’m in the track team of school I was able to go there. She concluded my ankle has Tendonitis. So now I have to ice it often and I have to do some exercises.

Thursday I had my first Christmas party from the skating. We went after practice (which I didn’t do because of my ankle) to a pizza place. I taught some of my team the cardgame ‘stressen’. They are getting good in it. They call the game: cards don’t care. Just because I said ‘It doesn’t care’ for a rule instead of ‘it doesn’t matter’. But now I know how to say it good. 😉

Friday was my second Christmas party at Nicole’s. We had hot chocolate, did a scarf exchange and watched elf. Hannah and I had to leave a little earlier because Hannah had to get up early for a skating meet the next day. So we only saw the half of the movie. My winter break also started on Friday. 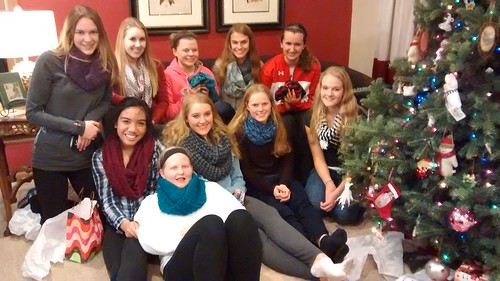 Saturday was my third Christmas party (yes, I had a lot of Christmas parties haha). This time it was of the family on the Bosman side (so the side of my hostdad). We all came together and ate. We also watched the Blackhawks game. Unfortunately they lost.. But it was really close.
*note: The Blackhawks is the (ice)hockey team of Chicago. They’re awesome!! GO BLACKHAWKS!!

I went skating in Chicago with other Exchange students on Monday. It was a lot of fun. I brought my own hockeyskates. So I didn’t have to wait to rent skates. I took a lot of pictures. It was rainy that day so I got wet. Luckily it wasn’t that cold. I went back with Eviny (Brazil) in the train. She lives really close to me and I didn’t know that. But now I know. 🙂 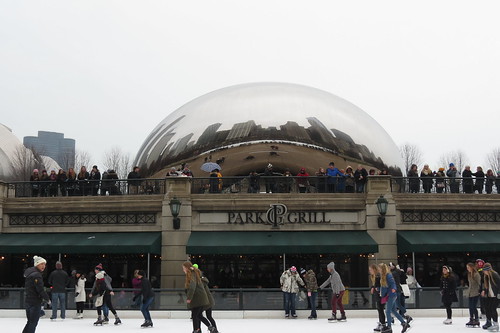 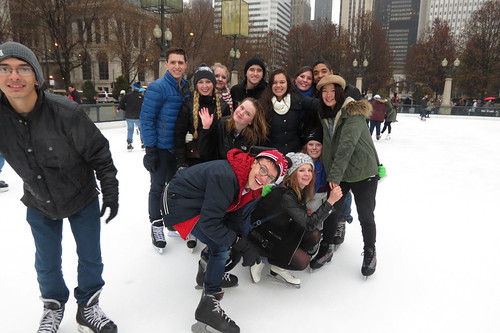 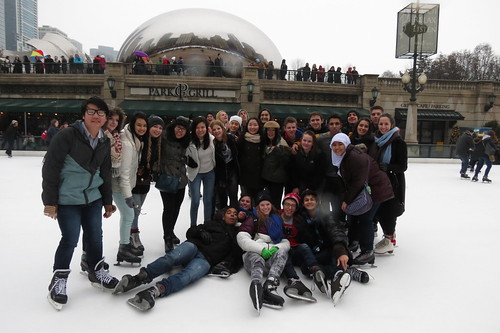 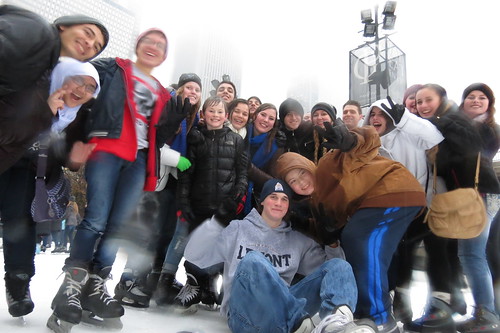 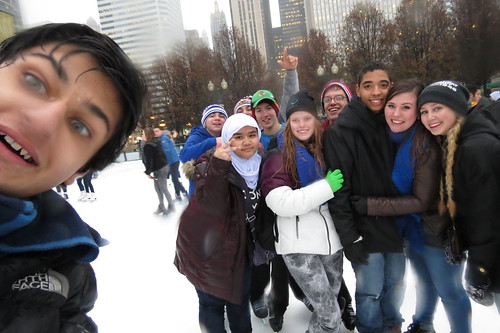 When the train arrived my hostdad did bring me to a laser game place for the birthday party of Jan-Eric. I came in halfway the 2nd game and I got last with 1 point that game. I played the 3rd (and last) game really good. I got 4th (out of 13?) with somewhere in the 400 points. I didn’t expect I would finish that high. It was fun to do. After that we went home. I was tired after a long day full with fun stuff.

It was Christmas Eve on Wednesday. We wrapped the last presents and put them under the tree. There was a big difference between the wrapping of me and my hostdad. I think I wrapped a little bit better. The present I wrapped is left and the one my hostdad did is on the right side. 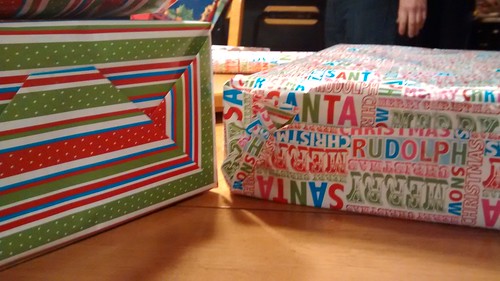 In the evening we started the movie ‘It’s a wonderful life’. My hostfamily watches this every year on Christmas eve. Half way we had to pause the movie so we could pick up Tessa from the airport. This is one of my hostsisters. She lives in California and she came home for the break. It was nice that I could finally meet her!! When we came back we finished the movie. I think it is a nice tradition to do. So maybe I will watch it next year again! 🙂

And then it was Thursday, the day of CHRISTMAS!! In the morning I woke up because I heard people laughing and talking. I dressed and went sitting with the rest of the family. First we opened our stockings. This a big sock with small presents in it. After that my younger hostbrother Micah got the presents from under the tree. There were a lot of presents. It was really fun. In the Netherlands Christmas isn’t that big. With my family we might have some small presents but not as many as here.  I got an awesome onesie (which looks like a polar bear), a sportshoodie, an US speedskating t-shirt, a hat with I <3 USA, gloves with on the right hand GO and on the left hand USA and some other stuff.

After that we tried to redo a picture of the family they made in 2001. I think the new picture (made by me) is pretty good. 🙂
Then we went walking at Graue Mill with the whole family. Ponce could go with us too. It was a while ago that he went somewhere else. So he was really excited. At Graue Mill we made some family pictures. 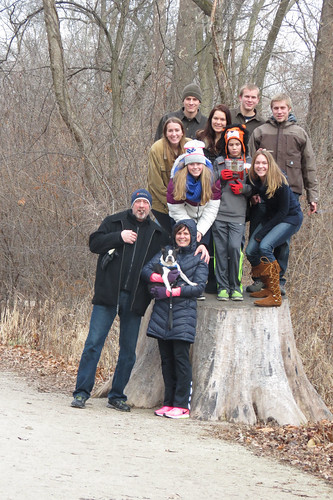 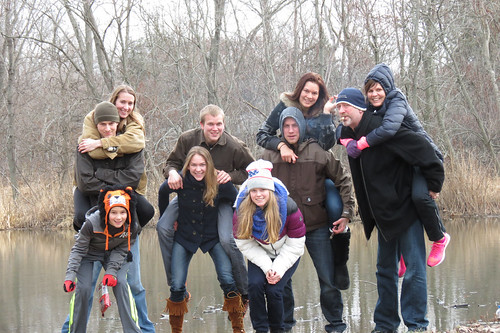 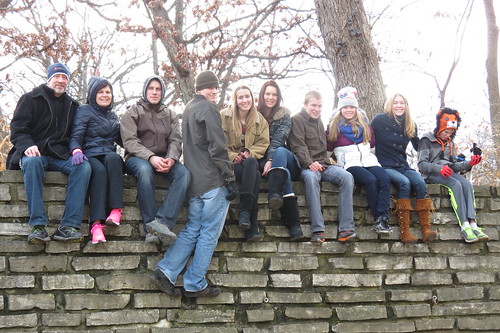 When we came back we skyped with my parents. It was fun to nice to talk with them and to ‘see’ them again. Here a picture my dad made during the skype: 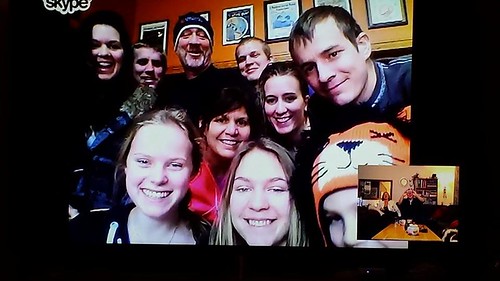 My class ring came also back in the post. I sent it back to the factory because the paint wasn’t 100% good. Now it is good and I’m happy I sent it back. I got also a hat made by my hostmom. It is really colorful. So now I have enough hats. I lost my hat that I did bring from the Netherlands before. So I didn’t have a hat.
In the evening we went walking in the neighborhood. Me in my polar bear onesie, hot chocolate jacket, my colorful hat and the colorful running shoes I bought here and my camera haha. I won’t be surprised if people think I’m crazy. I made some pictures with the nice Christmas lights. Here are some pictures. 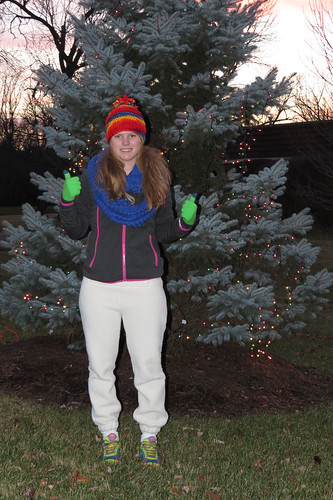 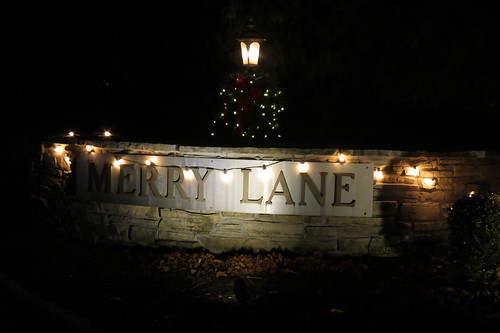 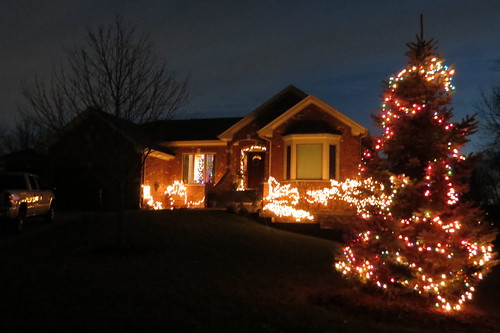 In the evening we watched old home movies. There were a lot of really funny parts. Like my hostbrother who just learned how to walk getting a (toy) car for his first birthday. And he drove against everything. Haha

Yesterday I went up to Milwaukee again for practice. It was an easy practice. I have a lot of times that I get dizzy and luckily I didn’t had that. Of course I had something else. My blade got loose so I had to go off the ice to make it again. After that I went on the ice again to finish the practice.
When we got home Hannah and I made some ‘knieperties’. This is like a thin waffle. In the Netherlands we make this every year around Christmas and new year. The machine didn’t work like it has to. So we didn’t make all. It took a long time.

Today I should go to Milwaukee for practice. But when my alarm went off I was really tired so I decided to stay home. This was a good choice. I slept for 3 more hours. I don’t know sure what the plans are for next weeks. I know Tuesday we will have another family party (from my hostmom her side) and I will probably go to Milwaukee. Monday Eviny and maybe Ana (both from Brazil) will come over. I’m planning to go in spring break to Hawaii. So I’m really looking forward to that.

Have a great new year everyone!!