New update, I did a lot of things!!

It is time for a new blog again!! I didn’t have time to do it last weeks so prepare on a (really) long blog!!

My last blog I wrote was when I just came home from my amazing trip in Hawaii! That week I was tired a lot. But after my day off I felt a lot better. That Saturday (April 10th) I had my home track meet. Because this was the only meet at our own school it was our ‘Senior Night’. This means that the Seniors get recognized. I am a junior at my school but they still recognized me to! I got a really nice banner here which says: Willowbrook Warriors, Track & Field 2014-2015. It also has my name on it and I am really happy that I got this!! It is so nice!! 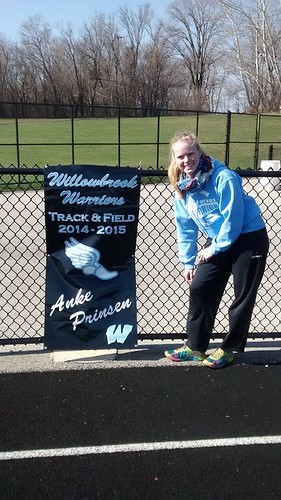 With my banner that my school gave me 😀

Hannah, Brandon and Ethan came to the meet to cheer me on (and to see me having a hard time in the 4*400 meters). When the meet was over we all went to my house and went kayaking in the creek, which is behind my house. We wanted to go all the way to Graue Mill, but this was a lot farther than expected so we ended earlier. My hdad picked us up. I got a sunburn this day, which was kinda surprising. I got a sunburn in Illinois, and not in Hawaii. I guess it was because I wasn’t paying attention to put sunscreen on.. 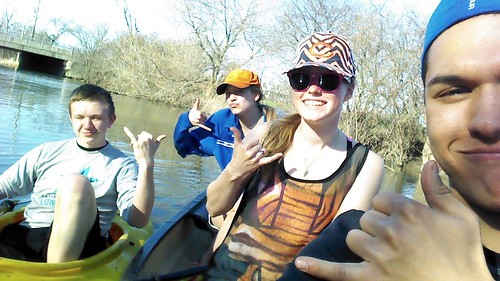 Kayaking, I got them to do the ‘hang loose’ from Hawaii

On Sunday I went downtown with Arina (Russia) and Ayna (Kazakhstan). Arina needed to buy new stuff so we went shopping. All I bought that day was a pair of socks, sharpies (so people can write on my flag), food and a kind of toy thing that was for sale and I wanted to know what it was. It was kinda stupid. But we had fun with it! 😉 After we got everything we went to a Russian Tea house that is downtown Chicago. Here they told me stuff about the Russian culture, which was interesting. After we were done we had to run to catch the train. We didn’t have a lot of time but we were in time for the train. 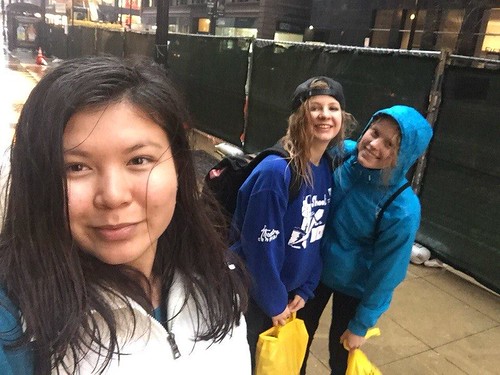 Downtown in the rain with Ayna and Arina

Ana texted me that day if I wanted to come to a concert with her. I asked my hparents and they said I could go. So the next day I went with Ana to the concert of Sixx AM. It was a lot of fun. After school I didn’t go to track practice. I went home to get my stuff and then I went to the train to Chicago. I met up with Ana at Ogilvie, from here we went with the L (which is the train from the movie Divergent) to the place the concert would be. Two other persons of Ana her school were there too. It was a lot of fun!! Just before the concert we were talking about Disney princesses also with other people who were there. It was kinda bad, because this was rock music and those things are 2 totally different things haha. First they had a band called Vamps, I didn’t really like their music and it was really loud. After the Vamps there was a band called Apocaliptica, they were pretty good. They had some songs I really liked. Sixx Am came finally after a long time waiting. Their music was pretty good! During this concert they almost send me out. Just because I was making pictures… No one told me that you couldn’t make pictures. Not even when we came in where they checked my camera.. But when they told me that I really had to put my camera away or they would send me out I put my camera away. I didn’t get a lot of good pictures, just a few. The concert took longer than we expected so I couldn’t get in time back to the train. So after the concert ended the mother of one of the persons of Ana her school drove me to Woodfield mall where Jed picked me up. It got home really late and I had to get up early for school Tuesday. Luckily I survived the day at school! J 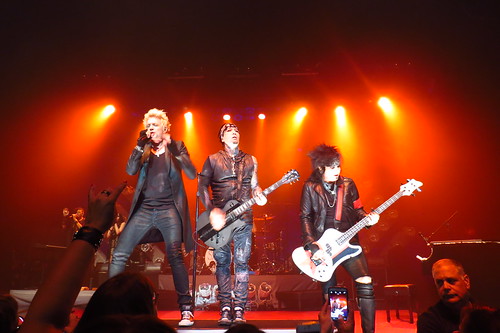 That week my hip started to hurt. I don’t know why because I didn’t do anything wrong. I didn’t run my practices. I still had to run my meet that Saturday in the relay. At the 4×100 we got a false start and because of this we got disqualified. I did run the 4×200 too. But my hip hurt after.. The day of this meet was really rainy. Luckily the school we were at opened the doors so we could sit nice and warm in the cafeteria. In the evening we had an award night with Glen Ellyn speedskating, my skating team here. It was a lot of fun! I won the team spirit award and the zambunni, this is like a bunny that you can win for the fastest flying lap. The zambunni has to go back next year. So Hannah will take care of it when I leave . They had a lot of other awards. My hostsister Hannah won an award too! I’m not sure exactly what she won. It was a lot of fun to see most of the skating team again! I didn’t see them in a while. 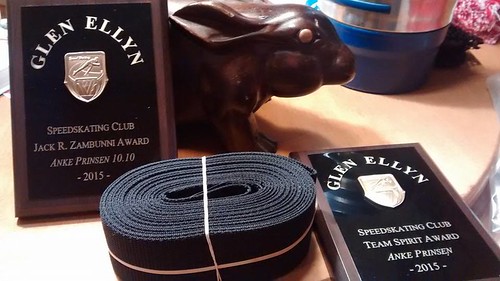 My Zambunni and my Team Spirit Award!

On Sunday April 26th I had my pre-return orientation. This was kinda sad because it was the last time we were together with the whole group and we only had like 2 months left (less than 2 months now…). It was nice to see everyone but the orientation itself was kinda boring. We talked about things we still want to do here and about some basic things they tell with every orientation. I was invited that day to go to six flags. I’m sad that I couldn’t go there because of the orientation. I hope I can go there later before I leave. I started to let people sign my Illinios flag, there are already a lot of people who signed it. A lot of exchange students, my track team and my family. I still have a lot more people who have to sign it. I hope it will fit.. Not sure if it will because there is not much space left……

Last time together with the Greater Chicago Area Team 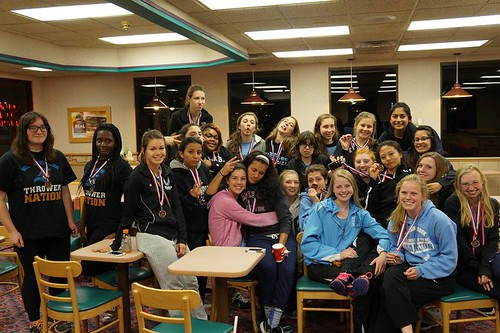 That Saturday morning I went shopping with Hannah. I bought new running shoes for NL, compression socks, running shorts and some shirts. I’m already thinking how I can get everything home.. and I’m still buying stuff haha.

That evening I went with some other exchange students to the Blacklight run in Joliet. My hparents brought Diane, Eviny and me to the run. Here we signed in and we got our shirt. We first wanted to wait for a while until we found the other exchange students before we would go and buy paint. It took a while until they found us. So when we were finally with them and we wanted to get some paint they were sold out. Diane found some paint on the ground somewhere so we used that. A little later I found some paint tubes which were thrown away with a lot of paint left in the trashcan. So then we were all getting pain out of the trashcan haha. We probably looked really stupid. But we got our paint for free hahahaha. After putting all paint on ourselves and some pictures we started looking for some other exchange students we didn’t found yet. We were with Eviny, Ana, Alexia, Manuela, Matheus, Talles (Brazil), Diane (Switzerland), Monica (Portugal), Arami (Paraguay), Rosa (Finland), Gam (Thailand), Naya (Indonesia). It was a lot of fun!! Some started out running, but because I wasn’t able to run with my hip I had to yell. Someone stayed with me than and someone else ran to the group to get them back. We just walked the whole run. Haha It was a lot of fun and with some people I talked a lot with some. From our plans what we still want to do here to and what we are going to do when we get back and we made plans to visit each other. We also were singing and dancing, people thought we were crazy! Maybe we are, but we are fun crazy! I can’t believe all those amazing people won’t live close anymore next year.. They will live at the other side of the world.. At the end of the run we were full with powder, we also got powder after the finish. So we even got more ;). I didn’t open my bag with powder. My hparents were already there to pick Diane and me up. So we just said goodbye to all the others and we went home. Hope I will see everyone before I leave again! Will miss them so much!!!! Really love them! 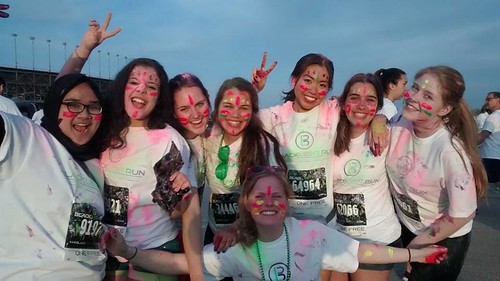 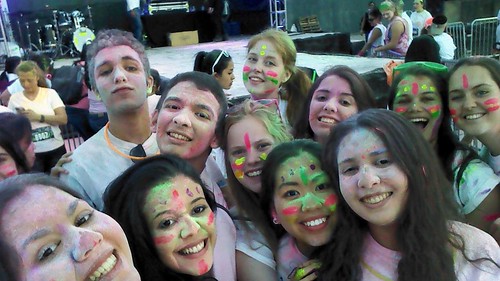 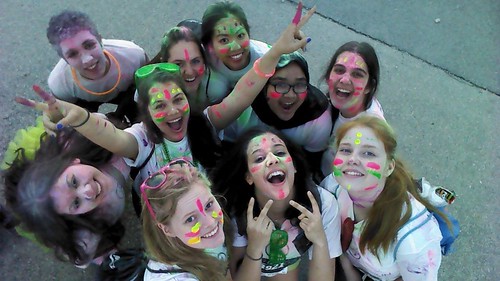 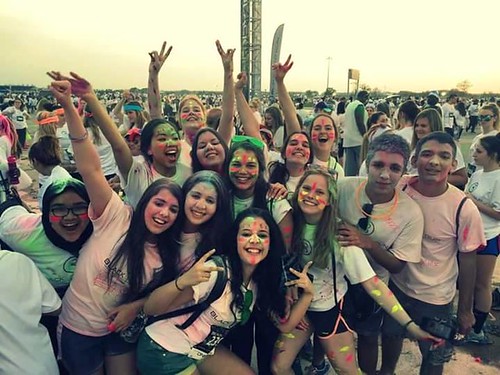 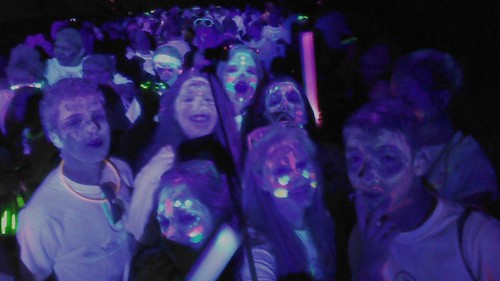 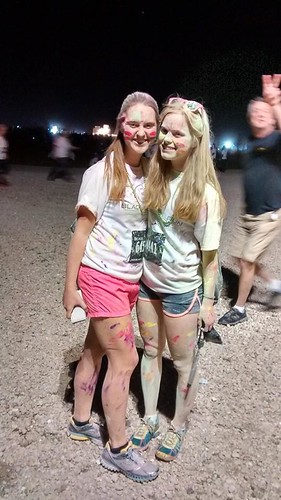 We were so dirty afterwards XD (with Diane)

On Sunday we ate breakfast with the whole family, in the noon I had to fill out papers for studies I signed up for. Earlier that week I had to sign up for the studies. In the evening I went to my liaison from AFS, here I ate dinner and I showed some pictures of trips I made. My liaison checks if everything is going good with me. Everything is amazing! I don’t have any problems here!! Only that I have way to many stuff to bring back. Most exchange students have this problem I think.

This past week I had a pasta dinner with my track team and conference. This was a lot of fun!! Conference was my last track meet. I had to hand in my track uniform after… My team is still training for sectionals and maybe state and I will stay training with them. The coach will probably take me to sectionals to see how it is. I’m not allowed to run there because I finished my school back home.. So that’s kinda stupid…

We also had a skunk problem the last weeks. There was a skunk right in front of our door. We knew there was an animal. It was my job to catch it. So I set the trap up and put a camera in Hannah’s room so I could see when I catch it. The skunk was really smart and walked all the way around the trap but didn’t go in. Because of my camera we knew it was a skunk. Like a week later I came home from school and then the skunk was in the trap. It was a lot of work to get the trap away. Unfortunately we weren’t carefull enough and the skunk sprayed… It was luckily on a blanket and not on us. Then Jed, Hannah and I brought the skunk away. I let the skunk out, that was the closest I’ve ever been to a skunk haha. Here a video letting me the skunk out, it smelled a lot so that’s why I had the hood on my nose haha:

I’m still planning on going to a drive-in cinema, to go to starved rock, science and industy museum, art institute, hancock building, six flags and more! I will also go for a week with my hfam to their lakehouse in Hayward, Wisconsin. So as you see I have a lot of things I still want to do. And time flies. So I hope I will be able to do all of it!! I will have a great time my last 1,5 month here!!

I’m going to have some fun now!! Hope you enjoyed reading!! Byeeeee!!