Exactly one month ago I arrived at Chicago O’Hare for my year as an Exchange student with AFS in the US. The time went so fast until now, I can’t believe it was already one month ago. It feels like I’ve been here for a really long time, and it also feels like I just came here. I updated my blog 3 times since I am here because I’ve done a lot. They are all also really long, if I had to write all in one time it would be impossible to put everything in it. I want to try to share a lot with my blog so I try to keep it up to date. 🙂

My other 3 blogs here were still in Dutch. But I will try to make it in English now. Sorry if there are faults in it because my English is not perfect (yet).

At the end of my last blog I said what I was going to do that weekend and I told I would go to a football game again (on orange day) that evening. The weather wasn’t that good so I really hoped they wouldn’t cancel the game again. Luckily they didn’t do this. I went to the game with Micah (hostfather), Becky (hostmother) and Micah (hostbrother). At the game I went to the people of my school. There is a special place for the students were we all yel. It is really fun to be there. I thought we would win our second game. One minute before the end we were in the leading position. But the other team made a touchdown and we lost (I didn’t go to the game yesterday, but if I understood it good we lost again… Hope we will win the next time). I went to sleep around 12.30 am and the alarm was set on 4.15. So I didn’t sleep much. 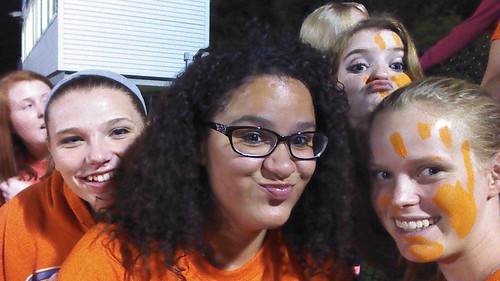 Last Saturday I went with Becky and Hannah to Holland, Michigan. It was really nice over there. When we drove there I slept much because I was tired of the short sleeping time that night. First Becky and I watched at the meet of Hannah and Nicole (and the rest of their school). After that we (Becky, Hannah and I) went to Panera to eat something. Then we really went to Holland. Becky her brother (David) lives there so we visited him. We went with them to the Holland beach. On our way there I saw the street signs had all tulips next to the name and I saw some Dutch souvenirs shops. It was fun to see this here in America. The Holland beach was really pretty. There were a lot of kites in the air. We went also on the pier. The waves were really big here and splashed on the pier. Ofcourse Hannah and I wanted some fun pictures so we went sitting on the pier and we waited till a big wave came. We have some pretty cool pictures. The only bad thing is we were wet and I didn’t have an extra shirt. I could borrow a shirt of Lynette so I luckily had a dry shirt. 🙂 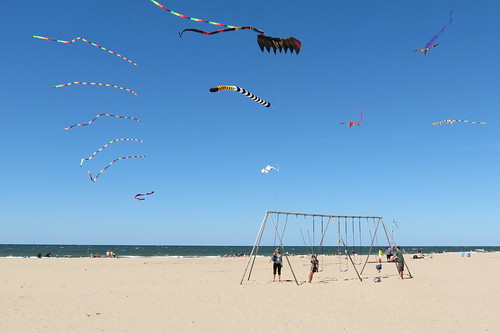 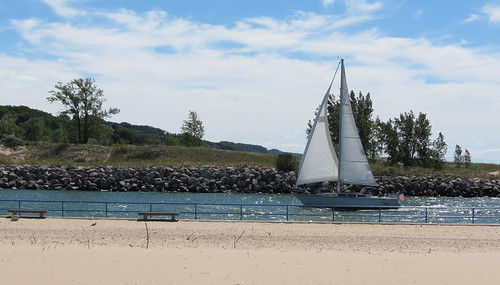 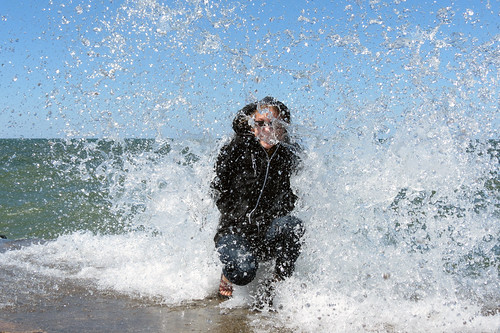 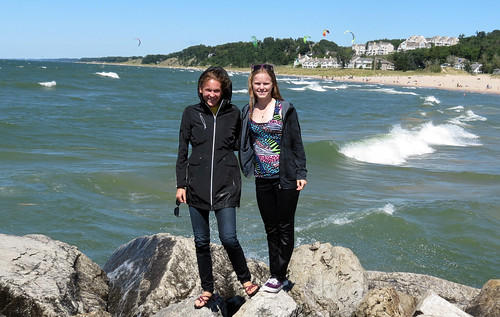 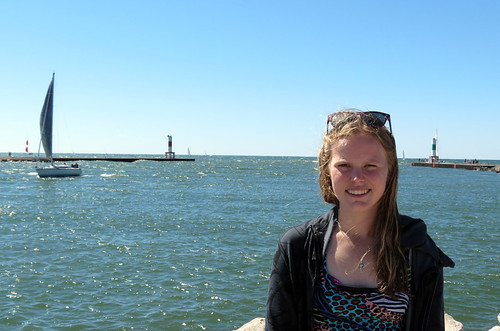 After we visited David and Lynette we went to the ‘Dutch Village’. It was fun to be here. You saw all Dutch names and you could see how people make wooden shoes or cheese and stuff. We went watching by the wooden shoes. Here was also a map of the Netherlands including Wanneperveen. After the wooden shoes we just walked around. We went to the ‘school’ where Hannah tried to pronounce Dutch words (she is really bad (sorry Hannah 😉 )) and we went to something with the witches. I don’t know how it is called but they measure you weight and with that they can see if you are a witch or not (I was not a which). When the park closed we went to the café and shops. Here we could order some Dutch food. So Becky and Hannah tried a kroket, a sauzijzenbroodje and erwtensoup. We also did buy some food so we have it at home. We did buy Koopmans pannekoekenmix (a mix for the pancakes we normally eat, it is just a thin pancake), beschuit met muisjes (I told when there is a baby people eat that in the Netherlands. We got it so the family could try it), speculaas (a kind of cookie which is really good), stroopwafels (also cookies which are really good. Hannah loves them) and ontbijtkoek (kind of cake). 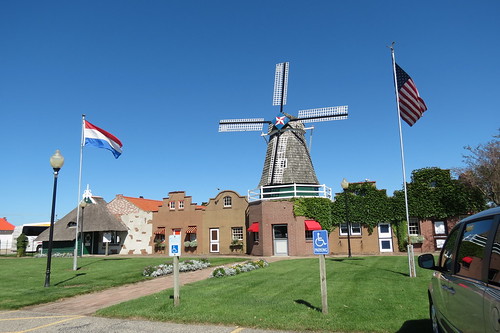 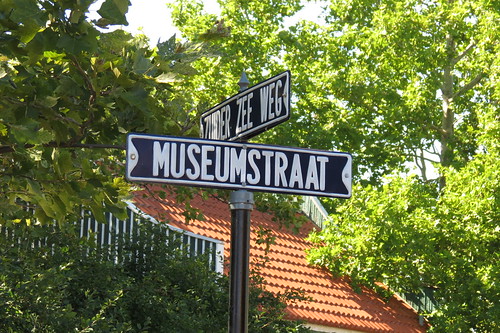 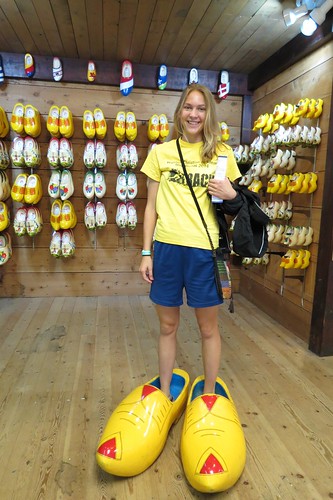 Later my father found out when he was watching my pictures on facebook the village Holland, Michigan is founded by A.C. Van Raalte. This man was born in Wanneperveen (the village I live in the Netherlands. So it was special. In the Netherlands I live in a really small village and the US is really big. (http://www.sleyster.nl/zwc890527.htm) 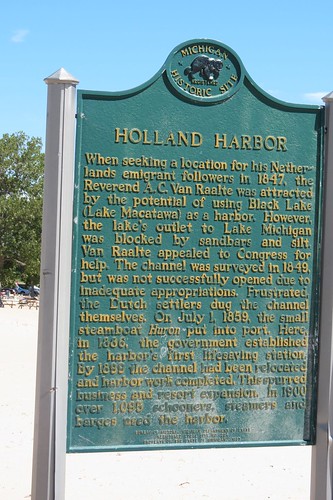 Sunday I tried to sleep as long as possible. When I woke up I thought it was 10.30 and when I was dressed I saw it was 8.30. It was really weird. I went in the morning with the whole family to the church. In the afternoon I had a picnic from AFS. It was really nice to meet people I didn’t meet yet and to meet new people. Unfortunately I had to leave earlier for an ice training (which is also fun). But I had a really nice time at the picnic. 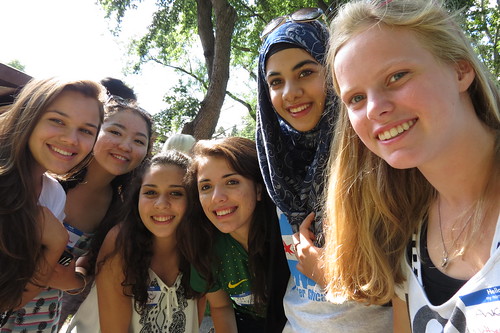 After the ice training I asked how to write guards (because I needed that word for my snapchat). Someone from my team asked why I needed to know that. So someone else explained English is my second language and I come from the Netherlands, which is in Europe. The one from my team said like: I know they speak French in Europe. So I told I speak Dutch. His answer: ‘I thought Dutch was a country’. It was really funny haha 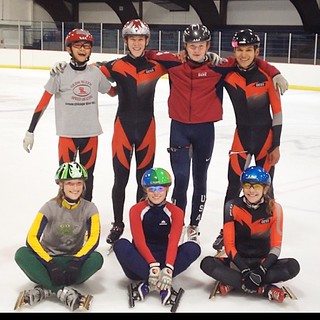 I had more funny things people asked me this week. Someone asked me if we have cars in the Netherlands and someone thought Brazil was also in Europe (when I told I lived in Europe).

This week was just a normal school week, no (extra) late starts or early dismissals. The little special things in the lessons/week: The ice training started (Tuesday, Thursday and Sunday), I hold a snake with Zoology (and a ferret, don’t know sure if I already said this), I had another Powder Puf Football practice, I made my first pictures with Photography and we did cut in a sheep heart with Anatomy. 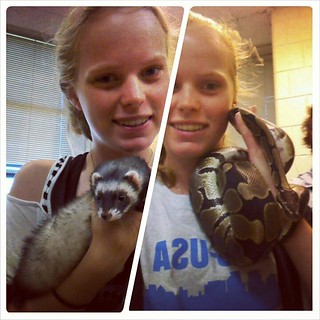 Wednesday after school my parents called me to tell bad news. Granny (the hostmom of my mom) passed away. My parents flew the next day to Houston for saying one more time goodbye to Granny. I promised her I would call here somewhere this year and now I’m not able to call her anymore.. I’ve been to Texas 4 times to visited her and the family and I had really nice times then. Last time was last year and I had an amazing time. I will miss her.
I love you Granny!!

This was my blog for this time again! Byeee!!