I just realised my last blogpost was July 29th 2015. So why not giving an update of what has been going on to now. I have some really excited news too! So more posts will be posted after this one.

Arianna:
Last year we hosted Arianna from Italy. She spent a year in The Netherlands with AFS. It was an amazing year with her. We took her like everywhere where we could take her. She lived with us from August 2015 until July 2016. Arianna already came back last Christmas (2016) and she joined us when we went to Austria for wintersports this February. 🙂 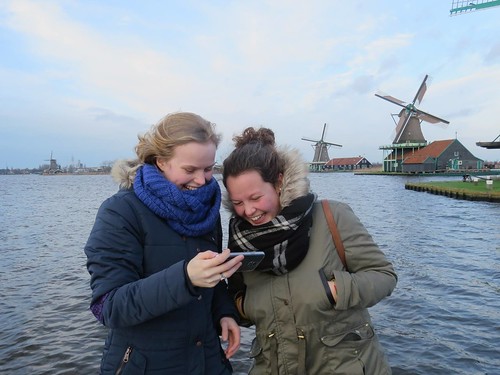 Summer:
The day Arianna went back home to Italy I went back ‘home’ to America. Leah got married this summer. My ‘real’ parents were at her wedding while I was making exams back home.. Too bad I couldn’t make it there earlier.. But now I was home with Arianna during her last weeks in The Nederlands.
So I went back to my hostfamily in the US and had an amazing summer. I met up with friends of mine and showed my parents Chicago during the 2 days they were there with me. I also made a trip with my hmom, Jed, Hannah and Micah around Lake Michigan. Here we saw a lot of amazing stuff. I also went visiting Jeri (my mom’s hsister) and the family in Alabama. My hfamily also got a new puppy this summer, Denali. She’s a white husky and really cute!

AFS:
Right now I’m still a volunteer for AFS. I often help with activities for the students who are in The Netherlands. Then I help at camps where I give workshops.
During this past 1,5 year I’ve met up with some other AFS’ers that I met during my year in Chicago. Pia did visit me in the Netherlands and I went to her place in Germany. I also went to Switserland to visit Seraina and Diane. It’s always great to meet up with people!

Dukky / Yerke:
Unfortunately we had to say goodbye to our dog Dukky this January.. Dukky had kidney failures and after giving him a lot of medication to make him better and after a lot of appointments he didn’t get better. Not wanting him to suffer we decided to let him go… It wasn’t nice to see him shivering and not eating. It was hard to say goodbye..

It was so quiet in our house after Dukky was gone. Later my dad was looking online and he saw this really cute puppy. We weren’t planning on getting a new dog. But we went to the breeder to check the dog out and we took him home. Now Yerke is a new family member at our house. He still has to learn a lot, but he is going good right now. Yerke has his own instagram account: @kooikeryerke.

Skating:
This past season I changed skating club in the Netherlands. I’m studying in the south of NL now so I decided to change club. Right now I’m skating for Shorttrack Brabant. I don’t practice that much as I used to do anymore. There are two practices I could join in a week. But it’s exactly at this time that I have classes often. I do try to go. But it didn’t really work out this winter…

In January we had nature ice again. We could skate on the lakes and it was amazing!! The first day I went skating with my dad. Knowing there was a 50/50 percent we would break through the ice. We still chose to go, because we didn’t know when we would be able to skate again. And everything was fine with the ice! 🙂

School:
I started my study Human and Technology (healthcare technology) September 2015. Therefor I had to move out and now I’m living in a house with four other students. I’m still often going home at weekends. This is like a 3 hour travel. I passed all my classes the first year, and now I’m halfway the second year. In September I’ll have to start a minor. I will probably go to Bali for that. I still have to talk to a foundation. If they are enthusiastic there is a big chance I can go! 😀 If I can go, I’ll write posts more often again! Starting with the preparation!

So this is what I’ve been up to. Of course I did much more. But this does summarize the important things what happened to me the past 1,5 year.