Apples and a haunted house

I found some time again to write my blog! 🙂 After my last blog I already did a lot of things again. I went to the silence parade, to Milwaukee and had conference.

I went the day after my last blog (October 10th) to the Silence parade. I could do this with a few other exchange students. I was with Christy from Nigeria, Diego from Chile and a volunteer from AFS. It was amazing to see so many fire trucks together. And it was even more amazing to sit in a fire truck. During the parade I sat in the front seat and I tried to make some good pictures. This was hard because it was dark and it was hard to focus.. But we still made some nice pictures with the fire trucks when we were done. At the end of the parade was a huge American flag. I don’t know sure if I ever saw a flag this big before. We went into a church and here they had a speech about all the people who lost their lives with fire. I didn’t understand everything because I couldn’t stay concentrated the whole time. I liked the part in the truck more. When we drove back I was in the back of the fire truck. So I sat in both places of the truck. 🙂 The man from the fire department who drove us showed us all the things in the fire trucks and in the building. This was really interesting. I learned things I didn’t know yet. Hereby I want to thank fire department Westmont that we could drive the silence parade with them! I really enjoyed it! 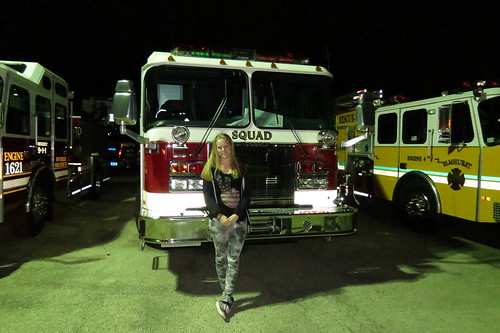 In front of the fire truck of Westmont 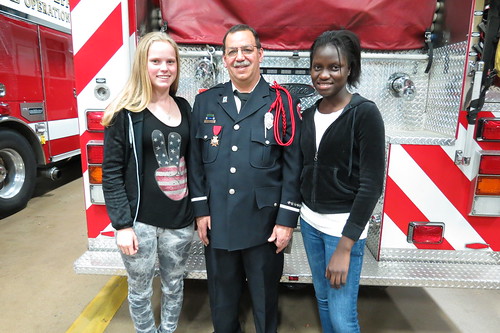 With Christy and the driver who explained us everything

The next day I had to wake up early to drive to Milwaukee for my first shorttrack meet here. There was also another Dutch girl who is on an exchange in Michigan. She normally skates longtrack but here she started shorttrack. It was nice to meet her!
The first distance we had was the 1000 meters. This didn’t go as expected. The way Americans skate the 1000 meters is different. I’m used to start slowly and speed up later in the race. But here they see the 1000 meters as a sprint. So the first race I had the feeling my time wasn’t good because my legs felt so bad at the end. But the time was better than expected. I ended in the last final, I took the 1st position here and skated it as I would normally do. Starting slowly and speed up during the race. I won the race but the time wasn’t that good haha.
The second distance was the 500 meters. At my first race I didn’t have a perfect start but I still skated good. But I wasn’t at the first 2 skaters. I won the second 500 meters race. The final.
After the 500 meters the racing day ended for me. We went to our Hotel in New Berlin (I found out a former AFS Exchange student who lives in my town in The Neterlands lived there), there we ate some stuff and after that we went back to the ice rink. Here we watched at the AM-cup, the people here skated for a place in the World-Cup team. When the AM-cup ended we went as fast as possible to the cinema. Here we watched the movie: The Maze runner. Of course we already came late (6.55) the movie started at 7 (I’m not 100% sure if the times are right but we didn’t have much time) and we were hungry. So we checked what food we could get and ordered pizza. After the movie we went back to the Hotel and there I gave Hannah, Brandon and Ethan a Wilhelmuts. They were happy with it. 🙂

The next day was the second race day. We had to skate the 1500 meters. My heat was pretty hard so I wanted to pass the one in first position on time. My pass wasn’t that good so I lost a lot of speed.. My legs were tired so I couldn’t pass him again and other people passed me. In the final I skated better. I stayed behind the one who passed me, even my legs were really tired. I think I got second in that race. I’m not 100% sure. I could check but right now I’m too lazy for that haha.
There was also a relay. I said they could place me in a team (the teams were random) but I wasn’t on the list. So I decided to coach the team of Hannah. I was a really good coach and the team got second. Overall I finished around the 9th place I think. I still got a medal, so I have a memory of this race. 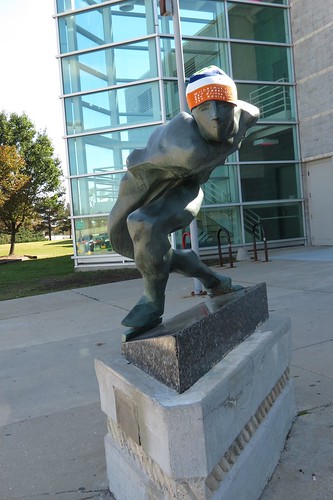 The art in front of the ice rink in Milwaukee. We made it a little Dutch with a ‘Wilhelmuts’

After we were done with skating we didn’t watch the AM-cup. I went with Becky, Leah, Hannah, Brandon, Brianne and the parents of Brandon and Brianne to the Halloween store next to the rink. This was fun. Halloween isn’t that big in The Neterlands. I think this was the first time for me in a Halloween store. It was really fun trying on all different masks. Ofcourse me made pictures!! 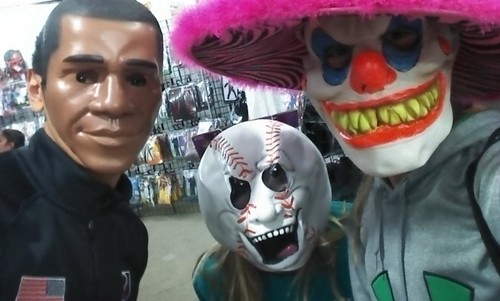 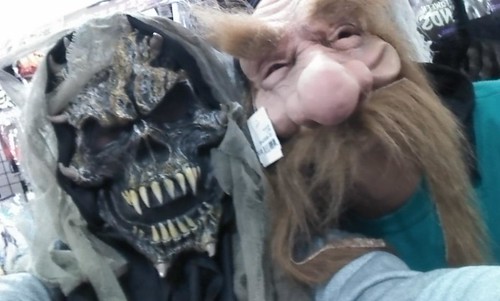 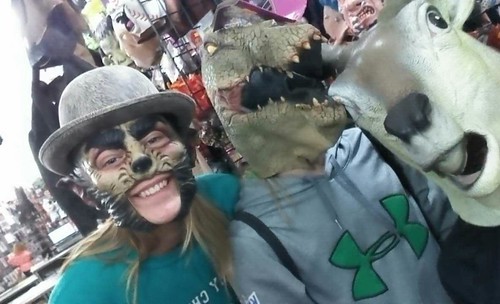 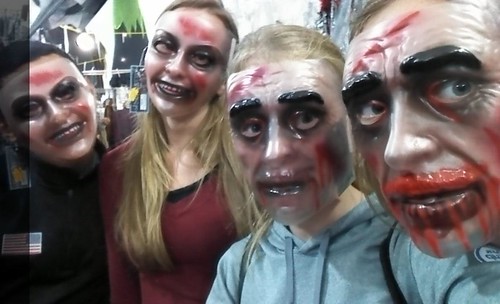 We also went to the Domes in Milwaukee. This are kind of gardens with a different climate. There was one dome with a desert theme, one with a rainforest (I think) and there was a showroom theme with The Wizard of Oz. It was fun to see all of this and I made some nice pictures. In the one with the rainforest was a really nice bird, and I have some awesome pictures of that bird! 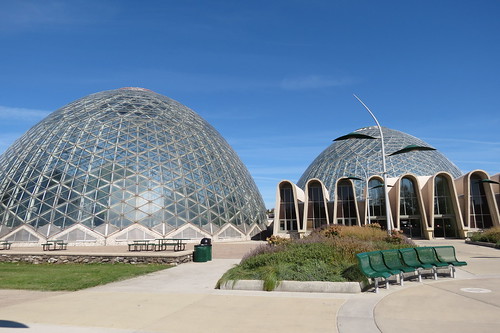 The Domes in Milwaukee 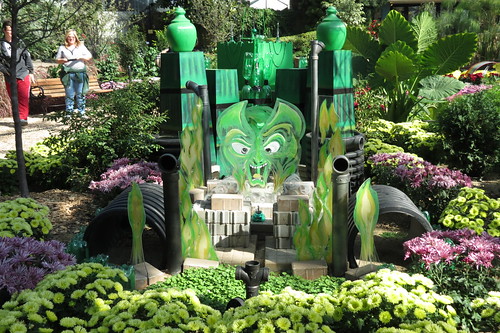 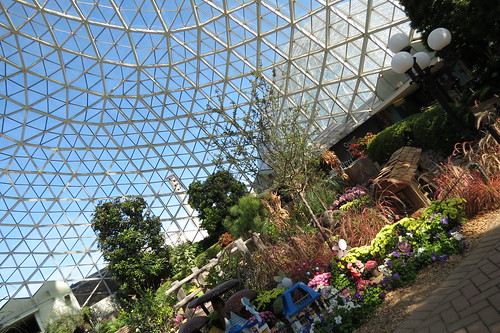 In one of the domes 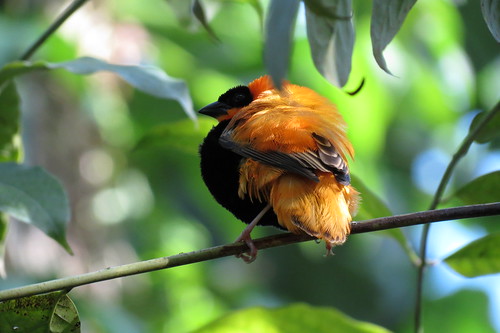 Nice bird at the Domes in Milwaukee

In the evening we ate at a café named BeNeLux. I saw this in a folder and thought they would probably have some Dutch food too. They had some Dutch food like pannekoeken (pancakes which are flat and bigger, different than the American ones). I think the food was really good over there! Maybe weird to say but the bathroom was also fun. They had like a really big picture of a Dutch train station.
After dinner we went home. We were all really tired and wanted to go to bed. But we had to wait a little longer before we could go to sleep because an AFS volunteer would come over for a visit and to check if I was still alive. After the volunteer left I could finally go to sleep.

The Monday I didn’t have school because it was Columbus day. I just took some rest in the morning. My new running shoes arrived so I could use them at the cross country practice in the noon. With practice we had 2 teams and we did Scavenger hunt. My team, the orange one, won.
The rest of the week was ‘normal’. It is still different than the Netherlands but I’m getting used to it. I was only really tired and I was getting sick. On school they had one day that the police came with dogs to check if nobody had drugs in school. I never saw this before, so this was something new for me. I didn’t really see the police or the dogs. On Friday was the last Cross Country practice and Saturday was conference.
Conference is the biggest / most important meet in the season. As far as I know. I was sick but I still ran. I started really good. After the first mile I was in 13th position (We ran with around 100 people(?). Not sure how much exactly). Just before the second mile I had the feeling I had to throw up and I started to feel my asthma really bad. But I just stayed running. A lot of people passed me here.. I could still do a really good sprint at the end, I don’t know where the energy came from. I finished 26th. I think it is pretty good. I even broke my personal best with 40 seconds. I didn’t expected that at all.
Sunday Hannah and I made poffertjes. These are like little pancakes. I think that is the best way to explain it. Further I just rested. I was still really tired..

Last Wednesday I did my first longtrack practice here. I got of school at 3pm and right after that we left to Milwaukee. Becky drove and further in the car were Carl, Hannah, Ethan, Jan-Eric and Janelle. I think the last time on longtrack ice was like 3 months ago. Eric, the coach, said my skating looked like a shorttracker. That could be right. I know my longtrack (except the corners) isn’t that good. But I will try to work on it. At the end of the practice it was already better than the beginning of the practice.

Thursday I had a fieldtrip with Photography. We went to the COD (College Of Dupage). Here we learned a little about the history of the photography, the green screen and lightning. We also had to make pictures of models. This was fun. 🙂

This week I also got the news that my brother can go to the first World Cup in Salt Lake City. I’m really proud of him and I hope he will skate really good! Good luck Mark!! 😀 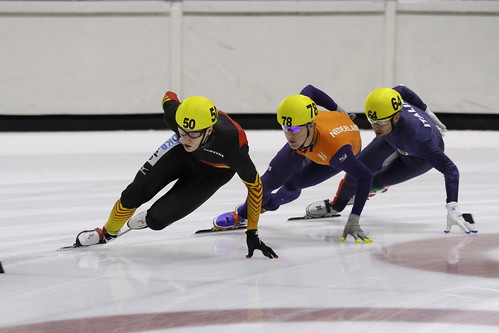 My brother during his meet to qualify for the World Cups

I think I said most things again. Later this day Ana (from Brazil) will come over. I am looking forward to it! And tonight I will meet up with some Dutch people to give them stuff they can bring to my parents. I also have to make some homework this weekend. I’m going to upload this now and clean my room. I found out I could keep my room clean for 2 months. It is getting harder and harder now. I am doing a lot and I’m often tired. Hope the tiredness will go away the following days/weeks/months..

Have a nice day everyone!!
And Hi from Illinois!! 😀