One week after my last blog again. Had my fieldtrip to Chicago, Voluntary day of AFS and went to a haunted house (prison).

Ana (from Brazil) came last weekend over. It was nice seeing here again! She came Saturday with the train and we picked her up. We talked a lot and as dinner we had Thai food. During dinner I got a text from people from the Netherlands that they arrived in the hotel at O’Hare. We did meet up with them so I could give them some stuff that they could bring to my parents. They were for a week in the States. It is easy I could give them the stuff so I don’t have to pay a high price to send it home. In the evening Ana and I watched frozen in the theater room (I want a theater room in the Netherlands too). The next day we played some pool and table tennis. After that Ana left.. 🙁

In the noon I had skating practice. Because it was the week before Halloween we had Pumpkin curling during our rests. It was fun to do! I got the second place of the girls behind Hannah (who came really close). The top 4 at the boys and the girls won a pumpkin. So I won a pumpkin too! 🙂 I didn’t have time to carve it. So maybe I will still do it even Halloween is already over or if I really have no time I won’t do it I think.

I went to Milwaukee again at Wednesday for a longtrack practice. There was someone who took some pictures. So here a picture of me on longtrack with a part of the team and in a suit of the club here. 🙂

Thursday I had a fieldtrip to Chicago with photography. We started close to the planetarium. From here we walked to Millennium park (where the Bean is). There the bus picked us up and we went to Navy Pier. Here I got $10 for lunch from the teacher because I won it with a homework assignment. On our way we had to make pictures with the black and white / film camera and with the digital camera. I still have to develop the negatives and to see all the digital pictures. I’m sure there will be some really nice ones. I did also make an amazing picture of the skyline with my phone. 🙂

Friday was HALLOWEEN!! We could dress up for school. I didn’t really have clothes for dressing up so I just had something simple. In the evening I went Trick or Treating with Hannah and Nicole. I wore a Blackhawks jersey and a mask. It was really cold outside so we didn’t go far. We still got a lot of candy. Alli came also over at Nicole her house after we came back. We ate dinner and watched a movie.

Now it’s time to explain the apples part of the title. I had an activity of AFS on Saturday. My liaison picked me and Seraina (from Switzerland) up and we went to the food depository in Chicago to do voluntary work. In total there were like 25 people from AFS. We had to sort apples and divide them into bags. Then we had to put the bags in boxes and put the boxes away. In the beginning it didn’t go that fast. But later Pia (from Germany) and I got a great teamwork and we went really fast. In total we (all of the AFS’ers and some other people who did the apples) sorted around 15000 pounds of apples (I think). I’ve seen enough apples here.
When I came home I had to hurry and make some food really quick. Then Hannah and I left to Brandon his house. From there we went with Brandon, Ethan, Colleen, Jan-Eric, Michael and Abby to Statesville haunted prison. This was really fun. In the line there were also people dressed up to scare you. I tried to make pictures with them. After 1,5 hour waiting in line we could finally go inside. I just screamed back to all people who screamed at me to scare me and I just stared at them. I really enjoyed the haunted house. 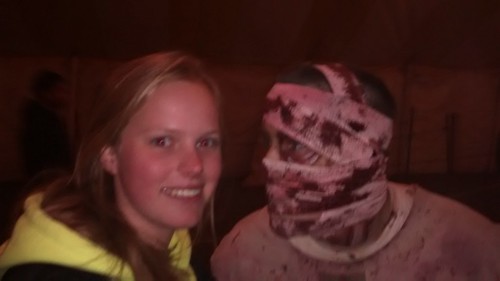 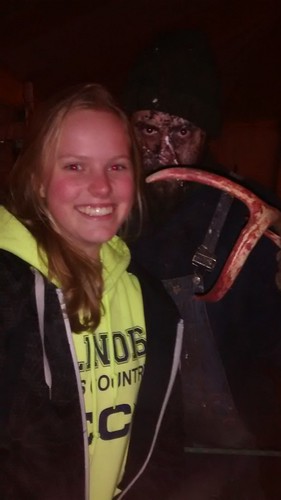 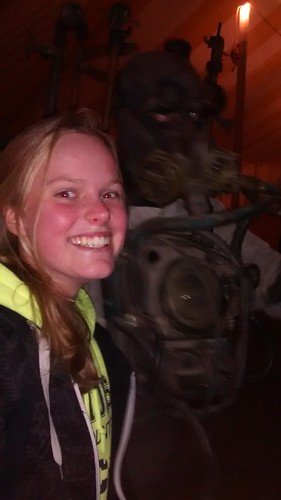 Tonight we had the time change in the USA. So the difference with the Netherlands is again 7 hours. I skyped again with my parents this morning. They can skype now on the TV and wanted to test it. So they saw me really big on the TV screen. Their camera zoomed sometimes randomly in, and nobody touched it. It was kind of creepy. They though we did it and we though they did it. My parents still have to read the manuals of the camera. Haha
Right now my brother is in Salt Lake City for the World Cup. He flew first to Chicago. So it is pretty cool that he was so close to me. I didn’t see him because he didn’t have time.

Think I said everything again. Byee!! 🙂